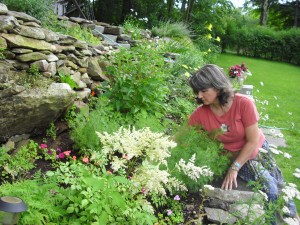 It’s so satisfying to grow your own medicinal and culinary herbs!  I, for one, hate paying exorbitant rates for second-class dried herbs at the grocery store.  When I see my culinary and medicinal herbs drying at harvest time in my kitchen I get an immense satisfaction (alright, it MIGHT be slightly smug) from the picture.  Nothing says home and hearth to me like bunches of dried herbs and peppers hanging from the kitchen beams.

My herb Garden
A like to really pack my herb gardens full of as many varieties as I possibly have room for.  I have my perennials, like the Oregano, Sage, Mint, and Tarragon interspersed with the annuals.  As a side note: if anyone has successfully over-wintered Rosemary outdoors in New England please let me in on the secret!  I’m thinking I may try bell jars this year; I’ll let you all know how it goes.

An herb garden in high summer, full bloom is a natural aromatherapy experience.  I like to take my morning cup of coffee out to the herb garden and just sit and breathe in the herb garden for a few minutes every morning.  It’s a mini-meditation that really helps me enter my day refreshed and ready.

Medicinal herbs are fairly “user-friendly” so to speak.  These herbs, so anxious, willing, and able to assist us in our daily needs with regard to healthy eating and also differing maladies, often grow naturally in the most unusual places; gravelly soil, craggy woods and infertile, unused meadows.  I like to seek out these little pockets, grab a few of the hearty little guys, and try to naturalize them in my herb garden.
Consider the lowly Chamomile:  it’s a gentle digestive aid, a calmative herb and a delicious sleeping aid when used in a tea.  It will grow in amazingly odd places with almost no encouragement whatsoever.  It is almost as if it is so anxious to give us aid that it’ll pop up wherever it’s needed.  There are two basic species of chamomile, Roman and German.  Both are tough varieties of plants named for tough peoples!  Once established in an area, these plants plan to stay.  They willingly re-seed and propagate themselves, without much assistance.  Even here in New England can be found a wild species of Chamomile — a cousin — called “Pineapple Weed”. 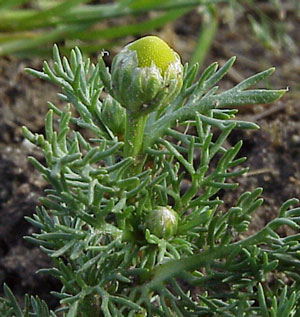 Pineapple Weed
It has much the same properties of cultivated German and Roman Chamomile.  (This is the weed that my grandmother used to collect for winter tummy woes and probably what Peter Rabbit’s mother made her Chamomile Tea from when he returned, after over-eating, from Farmer McGregor’s garden.)  This “weed” is often found growing in between sidewalk cracks, unbidden, it waits for us to recognize its willingness and ability to calm our stomachs after over-indulging in food or drink or calming our nerves when for some reason we are unable to sleep at night. 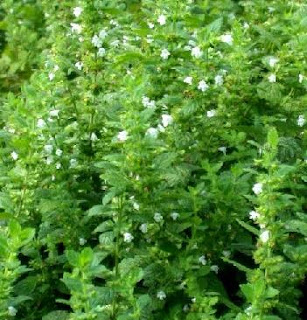 Lemon Balm
Once established, this lovely-scented herb is aromatherapy personified!  Be careful where you plant it, as it is quite prolific and will take over any area that it is planted in.  Also, I have seen this herb and others, like mint, begin to insinuate themselves into other herbs planted nearby.  One of my friends has a Greek Oregano plant right next to her mint and the oregano always has a faint minty flavor to it. 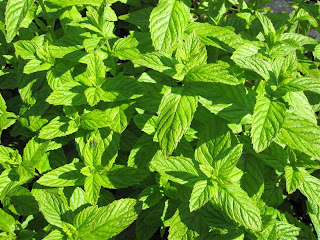 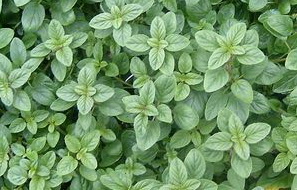 Ater Lemon Balm (and mint, for that matter) sets down roots and established itself well, don’t be afraid to heartlessly dig up around the outside rim to keep it under control.  Call your friends and offer them some roots; it’s a well-known relaxing and soothing herb and your friends will love you for it.  It’s also the most effective thing that I’ve ever encountered for eradicating “Herpes Simplex” … better known as “Cold Sores“.