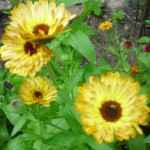 Calendula officianlis  L.  (POT MARIGOLD; MARIGOLD)
Originally from southern Europe, the calendula is a very hardy yellow or orange flower that grows easily in lots of sunshine and sandy soil.  It will flower in late summer, and continue to flower until a very hardy frost kills it.  The Romans gave it the name “calends” because it was usually in bloom on the first day, or calends of the month.  From this observation came the Latin generic name Calendula. 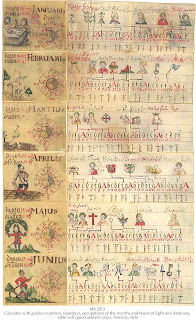 Roman Calender
In medieval England the monks of the period decided it should be named in honor of the Blessed Virgin, as legend described her as being accustomed to wearing golden blossoms, hence the common name of “Marigold.”  The Latin specific name officianlis was the standard term applied to herbs with official medicinal qualities.  Nicolas Culpeper has the following to say about the Marigold:
“They strengthen the heart exceedingly, and are very expulsive, and a little less effectual in the smallpox and measles than saffron.  The juice of Marigold leaves mixed with vinegar, and any hot swelling bathed with it, instantly gives ease, and assuages it.  The flowers, either green or dried, are much used in possets, broths, and drink, as a comforter of the heart and spirits and to expel any malignant or pestilential quality which might annoy them.” 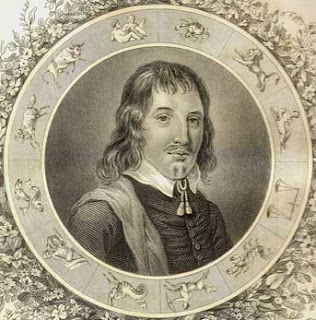 Nicolas Culpeper framed by the Moon Signs
MARIGOLDS are full of quercitin, an antioxidant.  Nicolas Culpeper, the noted 17th Century herbalist, said that Marigold is ruled by Jupiter and should only be picked under the sign of the Virgin.  Picking it during the rise of Jupiter, he said, will result in loss of all virtue.  The person assigned to the gathering of the plant must be free of deadly sin and must remember to say three Pater Nosters and three Aves. 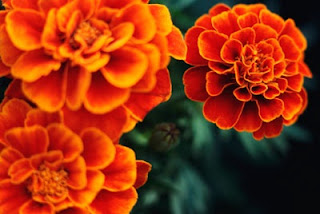 Marigolds
HARVESTING MARIGOLD:  This is an aerial herb; remember that all aerial herbs are harvested 1) While in flower; 2) On a sunny day; and 3) When the sun is at its peak, between 10 a.m. and 2 p.m. (sometimes I will harvest up to 4 p.m. in high summer).  You can pick just the flowers and dry them in a basket or on a screen that is covered with paper (they’ll stick to the screen) and lifted off the ground (in order that air may circulate all around it), or harvest the whole stem and tie them in bunches.  You will notice that the stems have the medicinal value too, although they are not as strong as the flowers.  However, why waste any of it?  Go from the flower down to the crotch of the stem, from which another stem grows, and pick at the end of the flowering stem.  Calendula is so very fruitful in its flowers, that there is little worry of having to get it all right away.  Leave some flowers now and then to go to seed and you won’t have to plant as much the following year.  They are an annual, which needs re-seeding each year.  You’ll notice that your hands are sticky as you are picking, but this will disappear without you washing it off.  It is an essence of the plant, and wonderful for your skin!
Hang your plants upside down for a minimum of 2 weeks to dry.  Watch the weather.  You cannot strip the herbs from the stems and store on a humid day; even if the herbs are fully dry, if the air has too much humidity on the day you decide to store your herbs, you’ll be storing moisture from the air that has affected the leaves and flowers of the herb and all your efforts will be wasted, because your end product will be mold in storage.
Uses:  Calendula has a plentitude of uses.  As you can see from its color, it is full of antioxidants, especially Quercitin and Vitamin C, so it should be part of any family health tea combo.  It has strong antibiotic qualities, both internally and externally (maybe as a result of the Quercitin and Vitamin C).  It is an important part of any skin salve you are making, and also is used in my Herbal Antibiotic tincture.  It is anti-fungal, so it can be used in douches for a vaginal yeast infection or used topically (fresh is best) if necessary.  It has been used as an anti-inflammatory.  It’s excellent for slow-healing wounds and Culpeper said it should be used for measles and smallpox.